LET THERE BE LIGHT

This year, those of us who know better, need to share the facts.  Breast cancer is NOT the success story that has been painted with broad pink brushstrokes.  Earlier detection hasn't changed the mortality rates.

What to do?  Speak the truth.  Share the reality.  Change the conversation.  Get as many people on the same page as possible.

Just like a pink ribbon isn't the cure for cancer, neither is lighting buildings BUT, first we need to garner some attention. We need people to see colors other than pink in October and ask some questions.  Then, we can share the message.

Project Light Up is a 2013 METAvivor initiative.  Thanks to a dedicated supporter, Houston City Hall was lit in the colors of the METAvivor ribbon last October .  Green.  Pink.  Teal.

That sparked the idea that we might approach other buildings for this October.

October 13 is traditionally the one day we try to move from pink mania and put the focus on metastatic breast cancer.

This October 13, Niagara Falls will interrupt its nightly light show.  Twice.  At 9PM and  again at 10PM, the show will stop for 15 minutes.  During that time, the Falls will be teal.  They aren't equipped to use more than one color.  Teal was chosen as it is METAvivor's primary color.

The Niagara Falls Illumination Board is responsible for the lighting.  It will be visible on both the Canadian and the US side of the falls.  I would like to offer my most sincere thanks to the good folks at the NFIB for responding so quickly and approving the request. 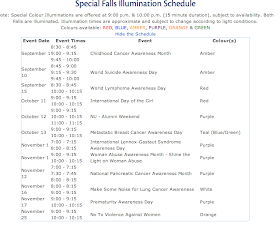 It's official.  It's on the website.  Hopefully, someone lives near the falls and can snap a photo or two!

If anyone has ideas for similar Light Up's, please let me know and I'll put you in touch with Shannon who is coordinating the effort.