Completely unexpectedly, and totally out of left field but what a thrilling day I had on Wednesday.  Last week, Dr. Love asked me if I would like to go to the White House.  We were in a session at the Partnering for Cures meeting.  She was quite nonchalant so there was a second, or twelve, where I don't think I quite heard or understood what she said.

Suddenly, she had her iPad open and showed me the invitation in an email.  I immediately accepted the offer and knew she had to make sure I would get security clearance, etc.  The following day, she told me, "Done deal.  You're in."  And I would be getting an email with further instructions.  I still didn't quite believe this was happening, so I didn't quite say anything to anyone.

And then, a flurry of activity.  Send personal information to make sure I wasn't related to the Unabomber.  Thought perhaps those TSA up close and personal, "I have cancer breasts" might have me on some sort of list, so I kept quiet until I knew for sure.  And even then, before Wednesday, aside from my immediate family, I only shared this with three other people.  I suppose I thought I would be tossed at the door or something.

As the details of the visit began to unfold, I was a bit conflicted.  The group of advocates were going to the White House first and foremost to deliver the National Breast Cancer Coalition petitions requesting support of the bill in Congress, Deadline 2020.  And thus, the conflict in my brain.

On January 4, I wrote a blog respectfully requesting they consider, as an umbrella organization, to have that umbrella protecting the metastatic community from the rain.  On January 4th, I was also at Memorial Sloan Kettering with my mom for a bone biopsy.  The same day I wrote that post, I learned my mom's cancer had metastasized to a rib.  It's one of those, "you can't make this shit up" moments that life tosses my way to keep me on my toes.  My mom needs an umbrella.  I'm under the umbrella, so are my sisters and my daughter.  My mom was, too.  In the morning.  And then, at 5PM, she was simply holding the umbrella over the rest of us while she remained in the rain.

Despite a double mastectomy, despite passing the magic five year mark and indeed, likely a dormancy from her first primary diagnosis in 1987 not the second one in 2007 although, that has not been confirmed and a good advocate doesn't presume anything, my mom was stripped of her NED status.  I do, however, trust the doctors and researchers who are familiar with her medical history.  They are leaning toward the strong indication this was dormant for over 25 years.  Timely commentary for those following the Amy Robach, Good Morning America on air mammography story that "saved her life" which has been thankfully addressed by voices far more intelligent than mine.

I was having a crisis of conscious.  In the end, I was going as a representative of Dr. Susan Love, the Army of Women initiative and the foundation.  There are people I will follow blindly because they have earned my trust.  Susan Love is one of those people.  Some may see that as foolish, the following blindly thing and others may see the White House visit as me selling out on my values.  At the end of the day, I'm the one who has to look at the reflection in the mirror, live with my choices and decisions.  And this is a decision I will never regret.

We went through a run down of what would happen when we arrived at the White House.  We hopped in cabs and took a five minute ride from the NBCC offices.  After several security check points and a canine unit, a group of about 18 advocates from 14 different states were greeted by Hallie Schneir, the Associate Director of the Office of Public Engagement and Carole Johnson, Senior Policy Advisor, White House Domestic Policy Council.  We were ushered into a conference room, took our seats around an enormous table and Fran Visco, the president and one of the founders of NBCC was asked to speak.

She began by saying that there has been little meaningful progress in the research.  Operative word, meaningful.  I concur. She proclaimed that the gains have been incremental and they aren't making a difference for the 40,000 women who are still dying each and every year in the same numbers.  I concur, wholeheartedly.  She talked about the need for continued funding of research through the Department of Defense Congressionally Directed Medical Research Program.  As one who has been invited to participate in the peer review process, again, I concur.  I saw the dynamic in that room and I watched as the assembled panel of a diverse group of extraordinarily passionate scientists and clinicians pored over applications, each adding comments within their areas of expertise... and then, listened with great care to the patient advocates.  High risk, high reward and true collaboration.  And, a program that began thanks to the efforts of NBCC.  At the top of the list of their Fiscal Year 2013 priorities for applicants, "eliminate the mortality associated with metastatic breast cancer."  She talked about sequestration and how damaging that is to research.  I've blogged about that several times, not that it changed anything, but I did blog about it.  And then, she asked each of us to introduce ourselves.

I introduced myself in the allotted time, "I'm AnneMarie, I also* live on Long Island and I am here representing the Army of Women initiative of the Dr Susan Love Research Foundation.  I'm six years post treatment, my mom is being treated for metastatic disease and I have a daughter I'm trying to protect."  (That also*?  The woman who introduced herself right before me was also from Long Island. Go figure, fourteen states yet two of us from Long Island?)  There were metastatic patients in the group and there was an 80 year old who had more energy and fire than the rest of us.  Combined.  A few people spoke and then, the senior policy advisors wanted to hear what we felt would be helpful to us as advocates.  How could the government help?

Certainly a loaded question but at this point, my goal was to throw out reasonable, ACTIONABLE thoughts.  What did I say?  I'm not sure I quite recall but I remember saying that the group assembled was primarily science savvy and although many of us have a good foundation to understand the research, that isn't trickling down to a large number of people.  I said I thought it would be exceptionally helpful if somehow the government could help with the messaging.  And, I had a perfect example.  What's going on right now with Good Morning America and the media using celebrity to spin a story is counterproductive to what we try to do as advocates.  I think I said that the public is getting a skewed view and it would be very helpful to find ways to control the messaging so that what's out there is accurate because these celebrity stories always seem to be missing big chunks of important information and it's a disservice to all.  Since we were only asked what we felt we could use help with, I stated my case.  I offered no solution but if they would like to assemble a panel to discuss that in greater detail, I'm in.

As for NBCC, I hope as 2014 approaches, they incorporate specific wording into their annual plan.  My suggestion?  Assemble a strategic summit to develop plans for making metastatic disease into a chronic condition.  Manageable and survivable without sacrificing quality of life in the process.  Let's make sure the metastatic patients no longer die.  The NBCC Blueprint says additional summits will be planned as needed.  There have already been summits on primary prevention and preventing metastasis.  Preventing death is a summit worthy item.

The fact that it's at the top of the list of priorities the DoD wants to see addressed in funding applications, I'm hopeful that NBCC will follow suit.  Fran has made it clear that it matters to her personally and that it matters to NBCC.  Stopping the deaths.  It matters.  Now, I'm simply hearing my dad's voice, "If you are going to put something in writing, make sure you put it all in writing."  That was one of his lawyer-isms that I never understood, until I did.

The action photo, as Sharon called it.... is one that I will treasure for the rest of my life.  This has been quite a month. 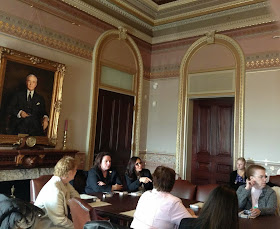