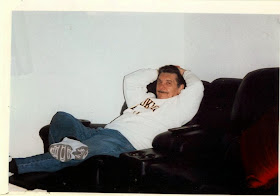 This photograph was taken on December 25, 2006.  Less than seven months after this picture was taken, my dad was gone.

My dad knew.  My mom knew.  They knew for more than a month.  In less than 24 hours, we would be told.  First, I had a date in the infusion suite at MSKCC.  Merry Freakin' Christmas.

Chemotherapy, followed by the planned lunch at my parents' with my siblings.  Somewhere in this blog is a post describing the absolute despair I felt the moment I heard the words "thing" and "lung" and "surgery"  ....  I already felt like shit which is the general way things go as chemotherapy progresses.  I was perhaps, half-way through my chemo when this news was shared.

That was my dad with a Stage One lung cancer.  In July, in an overcrowded emergency room, he would stop breathing.  It was one of those moments.  I remember hearing a scream and I remember that it was my own scream.  And then, I remember being outside.

The charge nurse appeared before my mom who was sitting on a bench, surrounded by my brothers, in a daze.  I could hear what sounded like a very far away voice.  "We need to know what you want us to do."  She repeated her question and it suddenly dawned upon me that she was asking my mom if they should attempt to resuscitate him and I snapped out of my nightmare and back into the moment.

I recall getting up in the nurse's face.  I recall lifting my finger to punctuate my point.

"You go in there right now and save my father's life."

I recall a snippy and maybe even a dismissive tone, perhaps it was a hint of sarcasm.  Or maybe I was hypersensitive and she was simply all business in that moment.

"I know what YOU want, but that's not what matters.  I have to know what your father would want."

I detached my emotions and I began to recant what my dad had put himself through from January until that day in July.

As I was rattling off a list of medical procedures, I wasn't two sentences in when the nurse turned on her heel and RAN back into the emergency room.  She was looking at a frail and weak elderly man.  My dad expected he would once again, look like he did in this photograph.  And he fought like hell, moving from one procedure to the next.

Back in January, the night before his first surgery, I went to see him.  I would be at the hospital the following day despite the fact that a hospital is one of the worst possible places for a chemotherapy patient.  While I was there, the phone rang.  He was scheduled to have one or two thirds of his lung removed.  The tumor was between two lobes and the surgeon couldn't be sure until he was in the OR if the tumor was attached to both.

My dad got off the phone and I was confused and I was extremely pissed off.  This man is diagnosed with lung cancer, he is scheduled for a serious operation and less than twelve hours prior, there's a "change in plans" and the surgeon doesn't think it's important enough to get on the phone and provide information.  I'm certain I remained calm and I'm equally certain I was LIVID and likely, by the time I got into my car, I'm sure I was screaming.  At no one.

Who the hell was this guy?  How DARE he do this and not even have the professional decency to get on the phone.

As it turned out, because my dad looked so great, no one bothered to take a good look at his chart.  He had turned 70 and at 70, additional tests had to be done before they could operate.  This is the age of Big Damn Data.  And computers.  One would THINK that there would be a red flag built in SOMEWHERE.  The doctor's office, the hospital office, the idiots that gave him medical clearance.

The following day, the bronchoscopy was done and this is why certain tests may be useless.  The tissue sample was not cancerous but according to Dr Hot Shot Cowboy Surgeon, "We all know what we are looking at, it's definitely cancer.  This is not a reliable test."  So, I have a question.  If it's not a reliable test, why the hell did you just subject my father to this? Because there was an OR booked?  Because you needed to collect a fee?  Hindsight is wonderful but in that moment, I said none of this.  I only remember when he came to speak to us, he was condescending.  My dad's sister was seated beside me and she asked a question.  He seemed annoyed at having to explain the meaning of the word "necrotic" to her.  No, check that, he didn't SEEM annoyed.  He WAS annoyed.

This guy was already working on a two strike count and I'm pretty sure, that was the moment he was officially relieved of his role as the lead surgeon, or any surgeon.  Hell, this guy wouldn't be cleaning instruments or for that matter, even mopping the floor in the operating room.  In the six months prior, I had been in the operating room three times.  Beyond that, I spent more time in offices with many different doctors and I was not accustomed to this type of behavior.

That was day one of what would begin a very long haul for my dad.  First, they found he had two coronary arteries that were partially closed and required stents.  Then, they discovered an abdominal aortic aneurysm which had to be repaired.  Before that surgery, he had five weeks of radiation to try to keep that tumor in check.

The first attempt to repair the aneurysm was unsuccessful and yet another surgeon was axed from the case.  The day of that particular surgery, I had chemotherapy so I could not be there.  I remember how sick I felt when I got home.  I remember that I couldn't get off the sofa.  And I remember my brother calling to tell me, "The hits just keep on coming."  My dad was under anesthesia for over three hours.  For nothing.

My mom had surgery scheduled during this window of time and there was a point when BOTH of them were in operating rooms at the same time, in the same hospital and I remember running between two different recovery rooms.  I remember the staff wheeling one of their beds past the other so they could wave to each other.  And I remember thinking, "If my oncologist finds out that I was running around like this, through hospital waiting areas, in and out of recovery rooms, he would be mighty pissed off.  But the thing is... in those moments, I wasn't thinking.  At least, I wasn't thinking about me.

The fun truly began after the unsuccessful surgery.  I set out to find the most accomplished surgeon I could to repair the aneurysm.  There are two ways to repair an aortic aneurysm.  One was less invasive and would allow us to move on to this lung cancer issue far more quickly.  The key was to find the right surgeon.  The traditional surgery was far more extensive and would require much more down time.  There was a tumor that kept getting shoved aside because these other issues took priority.  And I was freaking out as the weeks turned into months.

Ultimately, the aneurysm was repaired using a stent.  The skilled surgeon performed magic in the operating room.  It was a five hour operation and if I'm not mistaken, this surgery was performed on the day of my last chemotherapy treatment.  Or it was the day right after and I was couch-bound.

He healed and then, he was right back in the operating room after more PET scans to make sure they were still dealing with the same tumor.  A new thoracic surgeon, a different hospital and finally, the tumor was out.  Up next, four rounds of chemotherapy.  That was the recommendation of the surgeon, of the medical oncologist and of the NCCN because naturally, I already had the medical professional version of those guidelines downloaded and studied.

There was a trip to the emergency room in an ambulance from the oncologist office at MSK during a consultation just to add to the commotion and ultimately, he began chemotherapy shortly after I had my exchange surgery and oophorectomy.  I met him and my mom for his first round of chemo.  I already knew the ropes.  I was a recent graduate of that infusion suite.  The first round of chemo knocked him for a loop.

I was with him the day before his second scheduled chemo.  I remember the doctor saying he knew he had a rough time but he wanted to try one more round.  My dad agreed.  That was the very last time I saw my dad walking.  The next time I would see him would be days later, in a bed, dying.

His body said, "No More" and the charge nurse from that emergency room wanted to make sure of my dad's wishes.

I can tell you this.  My dad was not ready to die.  None of us was ready to let him go.  His death was a shock.  He was on the mend.

This is how he looked just six months later, literally days before he died.  No it wasn't lung cancer that stole him, it was complications that arose afterwards.  I recall his doctor telling me, "He was far weaker than any of us could know."  And, it started with a lung cancer diagnosis.  And it ended because of the treatment associated with that diagnosis.