Today is my nana's birthday.  More accurately, it would have been her birthday.  She died in March of 2006.  It was just weeks before I stepped into biopsy hell.  I am glad she wasn't here for that.

She had a very colorful way of saying things, I can guarantee she would have been mighty angry if she were still alive.  If I sit quietly, I can hear her voice and I can pretty much hear every curse known to mankind.  She would have used them all, and she would have made up a few new ones in the process.  Mom knows I'm right.  My two aunts know, too.  So, for that matter, does anyone who ever met my nana...

My grandmother died a few months after her 94th birthday.  She lived a long and full life.  And she smoked.  I remember her smoking when she was in the hospital being treated for pneumonia.  Obviously, this was many years ago when hospitals had smoking lounges but she was sneaking the cigarettes from her hospital bed.

I'm not advocating any of this, I'm just sharing a bit about her life.  And, including a little reminder: There was a point when smoking was not known to be harmful.  Or, it was known but it wasn't known by the general public.  Until the surgeon general came forward.

She was a rebel.  She was fierce.  And she was protective of all of us.

At 94 years old, natural causes is the only proper thing to say but the truth is:


My nana had lung cancer.

It was found on an imaging test when she was 91 years old.  She was not treated for the cancer and in fact, she never KNEW she had cancer.  My dad was adamant and fought with any and every doctor.

"She's sharp as a tack and she has a right to know.  We don't withhold information.  We are duty bound to tell the patient."  The doctors would be right but my dad was protective of my grandmother and he was having none of it.  Why should she live in fear of that word?  Of that diagnosis?

She did not suffer in the end, and pretty much, she smoked until the day she got into her bed where she died a couple of days later.

My heart was shattered and I'll never forget the words of the priest at her funeral.  "Ninety four years is still not enough."  And yes, he was right.   It wasn't enough time, there were still more memories to be made.  I miss her. 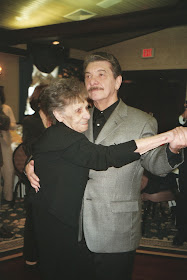