Terry Arnold was diagnosed with triple negative Inflammatory Breast Cancer (IBC) in the summer of 2007.  Later she founded of The IBC Network Foundation, focused on funding research for this disease and advocating for the needs of women diagnosed with IBC. What follows is information I asked Terry to put together. For me, October is about education over awareness. Fact over fiction. Evidence over anecdotal. And now, Terry:

Inflammatory Breast Cancer (IBC) is a rare and highly fatal form of breast cancer that is not typically discovered by mammogram and often occurs prior to standard breast cancer screening age recommendations.

Most people are very uneducated about IBC, and misdiagnosis is a common reason for delayed treatment.  Although IBC is viewed as rare, only 4-6% of breast cancer diagnoses, IBC directly causes about 10% of total breast cancer deaths (i.e. 4000 deaths per year in the US) because of both aggressive biology and inadequate treatment.

Due to being classified as a rare disorder with only a clinical diagnosis, IBC does not have a medical encoding number and generally speaking, is not taught in medical or nursing school. Typically IBC does not form a lump but has other clear physical manifestations described in the post below.  As a breast cancer without a lump, IBC is typically not addressed in pink awareness campaigns however we feel very strongly that this form of breast cancer needs to be better known.

A common phase in the IBC community is “rare does not mean never” and for everyone to be more educated about IBC, we will save lives.

During October, for breast cancer awareness month, the IBC Network Foundation has been sharing daily facts about IBC on social media with the #IBCFacts hashtag. These facts highlight differences between IBC and other breast cancers in an effort to promote education about this clinically distinct disease. This post is a collection of these facts written by Terry and one of her volunteers, Dr. Angela Alexander, an IBC and TNBC researcher at MD Anderson. (Note from AM again: Angela is a great friend to the entire breast cancer community. She jumps in to clarify research findings and helps us sort through what may, at times, be impossible to decipher)

For these reasons, we are passionate about including IBC in the conversation so that more women are aware of this orphaned disease and ask that they share this information and advocate for increased research funding for this highly fatal 200-year old form of breast cancer. For more information regarding IBC, visit the IBC Network website at www.theibcnetwork.org or contact Terry or Angela on twitter at @TalkIBC or @thecancergeek.

And guess what, as of December 30th, I'm happy to share: When it comes to IBC, there's now an app for that! For Apple and Android. Wow. So impressed. 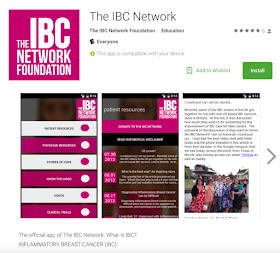