MY GIFT FROM THE SEA

I have so many irons in the fire I'm not sure writing a blog post is the best use of my time but it's important for me to do this. Today. Now. In this very moment.

When one chooses to launch a blog that is so personal in its nature, it can be challenging. None of us lives in a vacuum and yet, so much of our lives involve the lives of others. Whether children, spouses, parents, friends or siblings, their privacy is something that must be respected. Just because I choose to bare my soul, or my chest and their new tattoos, or talk about how I'm reclaiming my sexuality with Mona Lisa Touch, where is the line?

Make no mistake, there is a line and it's one that must be respected. I have felt such a connection and such a sense of community from the first day I hit the publish button. If I was going to do this, if I was going to take on the challenge of launching, and then sustaining a blog, it was going to be authentically me. I was encouraged by a dear friend, validated by my yoga instructor, and coached in the beginning by a volunteer mentor in the Visible Ink program at MSKCC.

I let the words fly across the page, tossed out any "Blogger 101 Rules" that may exist for some and decided, I am enough. I would simply speak from my heart. I have been joyful, and I have been filled with deep sorrow. I have shared what I believed was justifiable outrage at times, and I have expressed my fears but some of those fears were so scary, they remained locked in a place where I could not even glance. I've shared much about research which I have come to realize is where my advocacy passion runs deep.

Many of you know my messy family disease history as it pertains to breast cancer. Many of you may know my mom is living with metastatic breast cancer since 2013 and has been responding to the same treatment regimen since her diagnosis over four years ago. So many of you held me up when I tried to wrap my brain around that cruel twist of fate: hearing the word metastatic. That cut like a knife. That mom is still responding to the same treatment and that you have all been here? Gratitude. Deep gratitude. Gratitude for which I have no words.

What many of you don't know is that I have been living a messy personal life, too. In pain. Not physical pain, but emotional pain. In many ways, I have been living a lie and that lie has stolen years. Too many years. There is a backstory known to very few people. You know who you are and for holding me up, every single day for so very long, and to those who may not even have realized what their encouraging words for seemingly no reason have meant to me, my gratitude is as deep and vast as the ocean I have been gazing at for the past year of my life. For the one who reminded me, "as long as I've known you..." No Words Will Ever Suffice.

Aside from a handful of places in hundreds of entries, I don't think the words, "my husband" appear too many times in this space. Yes, I am married and I have been for many years. Legally, yes, I am still married but with divorce papers now filed, the time has come to step outside and beyond the shadow of "my husband."

I moved from a large home in a nice suburban community outside of NYC to a two room apartment in a beach community that faces the Atlantic Ocean. My apartment is furnished, which is to say, it's really not home. This year has been a stepping stone. Either I would find my way back to my marriage or I would have to step forward and move to an entirely different stone, one where I've never lived.

A stone with a home that will be solely my own. I lived with my parents and my siblings, then with husband, and children and now, I venture out on my own. By myself. For myself.

It has taken an entire year of living by the sea for me to become one with myself. Getting my heart, my head and my soul on the same page has been one of the most difficult things I've ever had to do. As the clock on 2016 was winding down, I was finally able to do just that. I realized that it was time to close the chapter on my marriage and begin writing the next chapter.

In many ways, these past five years, writing this blog and following the path where it continues to lead me, has been the chapter in between. And yet, it wasn't until I gained clarity watching the waves washing over the sand as the tide rolled in and out each day, every day that I realized I have been standing at this same crossroads for far too long.

For an entire year, I walked the beach. I got to know myself. I amassed a shell collection that is quite beautiful, albeit some might claim, a bit excessive. Who even KNEW the sea tossed these shells on to the shore on the beaches just beyond NYC limits? I became more and more comfortable in my own skin and realized I was living inside the skin of someone else.

I learned that a caterpillar sheds its skin five times before emerging as a butterfly. It wears, and then outgrows each of those five skins. There's symbolism in there, although my mind can't quite grasp its full meaning today. There's further symbolism in the struggle of the butterfly to break free of the cocoon which is what strengthens its wings. I'm not too sure how strong my wings are, but today, I am finally comfortable stating that I am no longer married, that I am a single woman. I have no idea what that means, or what it even looks like, I just know it's not who I am. It's what I am. Who I am is defined by many different things, the least of which is my relationship or marital status.

Legally my name is unchanged until this chapter is closed by a matrimonial judge. Hopefully that will be months and not years. Unfortunately, that is beyond my control.

I know when that day comes and I can reclaim the name I was born with, it will be to make certain I am honoring the man who gave me life, the man who cherished me and respected me, the man whose honor and integrity is head and shoulders above that which I leave behind.

I shed my skin.

AnneMarie Mercurio is about to emerge. 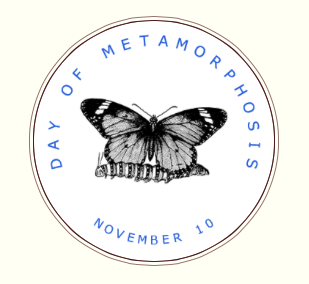 And yes, November 10th happens to be the day I was born, and that is from a book called The Secret Language of Birthdays. Say what you will, I say, if the shoe fits...

And on another note, with still more gratitude, it was suggested by a very new friend that I read Gift from the Sea by Anne Morrow Lindbergh. It was written in 1955 and I don't know how I never heard of this book. It's on my kindle. Only four pages in, I feel it was written for me. Hence, the title of this blog post is a nod to the book and a nod to the sea for giving me back my life.