PINK RIBBONS INC : LONG AWAITED **AND** WELL WORTH THE WAIT

It's HERE.  Long awaited and, in my opinion, well worth the wait, Pink Ribbons Inc. is officially in a wide release.  The words on the poster say it all.


"It's Time To Take OUR Ribbon Back!"


In NYC, it is playing at the IFC Center on West 3rd Street.  It opens today, June 1st and is scheduled to play through June 5th.  There are four showings daily.  TWENTY opportunities to get to NYC and see the film.  I promise, you will not be disappointed.

This is a list of cities and dates continually updated by the First Run Features.  They are distributing the film in the US.

Pink Ribbons Inc. has been reviewed by a number of different people.  Variety reviewed the film in September when it was only being shown in Canada.  There are a whole host of reviews from which to choose. The most recent review appeared in Salon.  Written by Mary Elizabeth Williams it is aptly titled, "The Tyranny of Pink."  Why the need for all of the review links?  Don't take my word for it.  I DO have an agenda.  Instead, I'd much prefer you listen to what others who have far more street cred in that Siskel and Ebert kinda way are saying.

I am writing this post on Wednesday evening.  By Friday morning, there will either be a link to a radio show OR, I will still be in a bar drinking with the finance crowd after exiting the radio studios which are down in that neck of the woods.  I was asked to do a short radio interview about Pink Ribbons Inc. as a volunteer for Breast Cancer Action.

It dawns upon me as I wait with anticipatory nerves, WTF were you thinking, sistah???  Having a microphone with an audience of women to discuss the movie was one thing.  Doing an interview which was shot a couple of times and then edited for the Visible Ink promotional video was another thing. 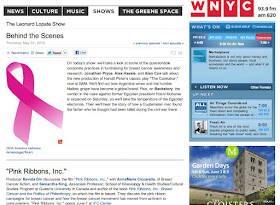 BUT LIVE RADIO???  As you can see, there are lots of OTHER things scheduled for Thursday.  As you can also see, my name is in bold blue letters AS IF......  It's a two hour show, ergo, the interview will be quick.  Samantha King, the author of the book upon which the movie is based will be participating in the interview.  So will Ravida Din, the producer of Pink Ribbons Inc.  And me.  Hoping my chemobrain takes a vacation for the day so I don't lose my train of thought.  Hoping that I am not intimidated by these highly accomplished people.  Maybe, I will just interject with an occasional, "Absolutely" or "Pinkwashing" or "Crippled the progress"  .....  "Download the toolkit"  "Breast Cancer Action"

Hell, I'm just a blogger.... and this blog is supposed to be a joke.

If there's a link to the interview anywhere on this blog, I did it.  And I held my own.  If not, you can safely presume the weekend started on Thursday at approximately 1PM and it may continue right through Sunday night.  You can also assume it involved lots of tequila as that seems to work best to expunge my memory.

Yes, I am THAT nervous.

Does this count as a performance of sorts?

If so, I think I'll go break my own leg.

I survived the interview.  Leonard Lopate and his staff at WNYC could not have been nicer!  Tequila?  Not so much.  However, and coincidentally there was an evening of fun.  It didn't involve tequila, it did involve friends and fun...... and a few cocktails, too.  Here's the tape.....

I forgot to include the link in case the player doesn't work properly.  You can listen directly on the WNYC site.  You can also read the comments, some of which I WILL address on this blog next week..... Stay tuned, rant around the corner...