Happy Valentine's Day!  More importantly, did you know today is National Organ Donor Day?  I didn't, or maybe I did and I forgot.  Thanks to a tweet from my dear friend, Stephanie, I was reminded.

I'm an organ donor.  I recall having conversations regarding eligibility of cancer patients to donate organs.  I don't recall the answer.  I do know that if my organs can't be used for transplant and they can be used for research, they will be in the hands of a researcher after I'm gone.

I'm reposting Stephanie's story which originally appeared here in September of 2012.  It seems fitting to post it today, the day we are surrounded by hearts and flowers.  Stephanie's heart, the heart of a donor, is HUGE.

I would encourage everyone to investigate organ donation and consider the gift of life.

There are stories out there, some rather close to me, that would rip your heart out.  Literally.  Please.  Think about it.  A beautiful life that is changing the lives of many may be the life you save.  A life like Stephanie's:

MyHeart: NOT my Own

Let me begin by saying that I am an ordinary wife and mom doing life in the metro Atlanta area, but my life has been extraordinary. Even so, you will find that I am more like you than not as you get to know me.

I was diagnosed with Ewing's Sarcoma, a rare form of childhood cancer, at 8 years of age when cures were not thought possible, especially in children. My parents were told that I would likely die within 6-12 months; however, they were offered treatment as part of a clinical trial. Believing they had nothing to lose yet everything to gain, my parents agreed to enroll me into a prospective, randomized clinical trial investigating dosing and scheduling of the chemotherapy.

I completed 21 months of treatment comprised of 30 radiation treatments to my left chest and chemotherapy consisting of Vincristine, Cytoxan, Actinomycin-D, and Adriamycin.

To my knowledge, I remain the sole survivor of a study that has been instrumental in determining today's best approach to the treatment of Ewing's Sarcoma in the child diagnosed today in 2012.

During my treatment days, I found myself desiring one thing, the company of a fellow traveler. In a day where cures were not common, such fellowship was not readily available. Compelled by that desire, I chose to enter into clinical practice first as a bedside nurse, then as a nurse practitioner serving children and families facing childhood cancer.

I believe that my lived experience enlightened my clinical practice and the children and families I cared for were well served by the fact that I was a survivor of childhood cancer though it was the few who were privy to my medical history. 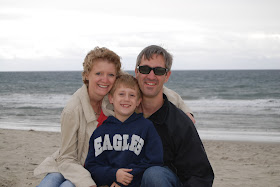 My life story includes marriage to my college sweetheart and the birth of our son who quite candidly is the child I was told I would never bear.

The reality is that cure[s] do not come without consequence[s].

The treatment that I received left significant and irreparable damage to my heart, lungs, musculature,  my shoulder girdle, and my left chest wall.

In particular, the combination of chest radiation and Doxorubicin damaged my heart's ability to “squeeze” blood to the rest of my body while leaving my left lung fields “whited out” with fibrotic/scar tissue. I have a significant curvature in my spine due to the unilateral radiation of the tumor bed, my shoulder girdle is deformed due to damage to my collar bone such that it rotates inward and forward causing 'winging' of my left shoulder blade, and my chest wall underdeveloped and collapsing the upper lobe of my left lung.

I read that paragraph and I sound like a living, barely breathing, contorted train wreck. Truly, I am not.  I am attaching a picture to prove it :)

Our son, a babe I was told would never be because my heart would not be strong enough is our joy boy. He's lived a lifetime in 9 years filled with one trial after the next, yet his joy is abiding because it is not grounded nor dictated by circumstance. Amazingly, my heart functioned normally throughout my pregnancy and only towards the end of my term did my lung capacity diminish, yet despite the challenges, we welcomed our son to LIFE in April 2003. My heart spit and sputtered with the post partum diuresis that takes place, but was managed medically and I bounced back to normal. Normal in my world is likely abnormal in your world. Essentially, my heart function bounced back to 30%, my normal, compared to 60-65% most people's normal.

It was in 2006 that I was counseled that my heart function was slowly declining and the recommendation was made that I undergo valve repair surgery in the hopes that my heart muscle would then be able to function at a higher level.

I underwent that surgery in 12/2007 at the Cleveland Clinic in Cleveland, Ohio.

The surgery was successful in restoring the heart valves to optimal function; however, I did not recover as my heart muscle became nothing but a flutter with about 5% squeeze in early February.

By mid-February, my body became refractory to medical therapy and we learned that my case for transplant locally had been declined. I was admitted locally for the last time in mid-April with end stage heart disease one week away from evaluation for heart transplantation at the Cleveland Clinic.

Life-flighted to Cleveland on 4/19, submerged into a coma, then placed on ExtraCorporeal Membraneous Oxygenation support and listed with UNOS** as a status IA [life expectancy less than 30 days], I received the gift of an opportunity at continued LIFE through the death of a 17 year old young lady who checked “yes” at the Department of Motor Vehicles.

Today, I find myself once again compelled to give of my heart, my LIFE into the hands others that they might take heart and glean some benefit as a result.

This life I will live is full of hope and future and inasmuch as my heart is not my own, neither is my life.

To that end, I have joined hands with Judy Bode who lives the daily reality of a heart now failing secondary to radiation therapy used to cure her of Hodgkin's Disease as a child in the founding of myHeart, yourHands Inc.

Our battle cry is late effects of cancer therapy.

myHeart, yourHands is a not for profit aimed towards raising awareness regarding the potential late effects of cancer therapy among ALL cancer survivors and the frontline healthcare providers charged with their care as well as to inform the population at large about the critical need for registered organ donors.

I invite you to visit us at www.myheartyourhands.org and I thank you for your thoughtful consideration of our stories in relationship to your network.

Clinical trials?  ClinicalTrials.gov is a good place to start

Late effects of cancer therapy?  I can make a joke about my worsening chemobrain..... or I can let Steph's words stand alone.  People are in dire situations from the treatment that "saved their lives."

It's no joke.  We simply MUST do better.