It's World Cancer Day and I stand in solidarity with every single person who has been "touched" (I would say ravaged but I'm always accused of over-dramatizing) by the disease.  At this moment, two people who mean the world to me are in hospice care.  They are both young and I am heartsick.

I have to set the rest of the World Cancer Day "festivities" aside to mention how tremendously impressed I am with my NEW health insurance company.  I'm impressed with the way they embraced social media.  I found them when I was utterly frustrated to find affordable replacement coverage where I could continue my care at MSKCC.  All of the policies were changing and the networks, too. Contracts were being renegotiated.  (I'm presuming that part of it but it surely seemed like that is what was going on in NYS.)

Health Republic sent a message out into the world that is twitter announcing that MSK is part of their network of providers.  I contacted my broker who provided me with all of the information and I had an option that was reasonably priced for the best coverage offered by the company.  YAY.

Fast forward to last week.  It's time for me to pick up prescription refills.  I hadn't gotten my new ID number.  The pharmacy called.  Please come in with your new insurance card.  The refill for two medications would have cost $150.00 under my expired plan which is still exorbitant, but without my insurance in place, the tab was in excess of $1100.00.

I already did some homework and I knew the femara is on a list of medications that must be authorized by US Scripts.  I faxed all the necessary paperwork last week for the femara.  The other medication is from a different doctor.  I spoke to him on the phone, also last week, when he collected every bit of information and contacted US Scripts.

This morning, the local pharmacy called me to tell me they still hadn't heard anything, that my medications were still in the bin, and QUOTE:

"It's ridiculous.  For every prescription we are able to fill, there is another one that now requires authorization.  We are spending all of our time on the phone, calling customers, doctors and insurance companies."

I have no suggestions about fixing it thus it seems a bit disingenuous to bitch about something for which I can offer no solution.  However, this so called health care reform, is starting to feel a bit like I am being pushed to CONFORM which, as an engaged patient with a decent understanding of evidence based medicine, does not sit well with me.

In my frustration, I tweeted:


WHY am I still fighting w/insurance for pre-authorization for 2 medications I've been on for SIX years. @HRI_NY I'm getting very upset #ACA
— AnneMarie Ciccarella (@chemobrainfog) February 3, 2014

There was a bit of back and forth banter and a few people retweeted my message.  Thanks to the time stamp on my tweets and caller ID, I know it was less than an hour between the first tweet and the phone call.  The voice on the other end was a normal person.  He identified himself as Ed Anselm and said he understood I was having a bit of a problem with my prescription medication.

What I learned as the conversation continued?  DOCTOR Anselm is the Chief Medical Officer of my new health insurance company.  They have a presence on social media and obviously, they have someone paying close attention to the twitter feed.  He asked me a few questions about my medications.  I told him I had been on them for six years and that I wasn't having any luck getting authorization to pick them up unless I was ready to part with lots of money.  He promised to call me back within 30 minutes.  When the return call was 35 minutes later, he apologized for being late.

We chatted a bit, he gave me his phone number and instructed me to contact him to let him know that the issue was resolved and that my medications were in my possession.  Because of this latest round of unexpected snow, I got distracted trying to help a stranded kid get back from Phoenix.  He's still there although if he doesn't get back before early this evening, he will likely remain stranded until Thursday.  Apparently, another storm is heading through these parts later today.

I still don't have my meds, but I still haven't seen a snow plow on my street either.  Since I gave up the SUV when the kids no longer required mom's taxi, I'm snowbound until the road is cleared.  I have about five days of meds left.  I'm beyond confident that this matter will be completely resolved in no time at all.

Shout out to Health Republic for doing it right.  If they could put in a word with the Snow People, I'd be mighty grateful.  Yeah, yeah, YEAH... it looks beautiful.  But.  Enough already.  It's a damn nuisance. 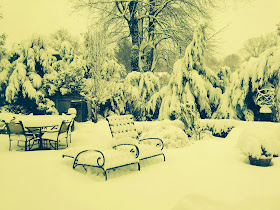 The yellow cast?  I refused to open the door.  I guess the protective stuff on the glass really does work.