ANOTHER CELEBRITY, ANOTHER STORY

AND YET, we are all different.  Cancer is not one disease, but many.  Breast cancer is not one type of cancer but a site specific disease with many subtypes and and many MORE molecular signatures, proteins, pathways and every other conceivable thing that researchers are learning about each and every day.  Yet, there is no breakthrough.  None.

Research is evolving and it is evolving at warp speed for some.  For others, not so much.  There was an infographic from the recent ASCO (American Society of Clinical Oncologists) meeting touting those five year survival rates.  Just as an aside, that is a statistic I happen to abhor.  A show of hands please.... Who among us is a five year survivor living with metastatic breast cancer.  Off the top of my head, I can come up with 20 names in a millisecond.  I am not one of those 20, but my mom is and so are many of my friends, quite a few of whom succumbed to this wretched disease in a very short period of time.

However, this particular infographic was telling and chilling.  It can be found on Phrma.org, the Pharmaceutical Research and Manufacturers of America.  The Value of Cancer Medicines may have fallen under the radar but something jumped off the page when I glanced at just one section of the image.

With apologies for not obtaining proper permission for cutting out this piece of the image to include here, something is really wrong with this picture.  Or maybe, it's the way the statistics are being read and interpreted.  Anyone who knows me, knows how I have a problem with the presentation of statistics.  Anything can be skewed to punctuate a point.  I'm choosing to highlight something that gets lost in the pink hype.  I'm not being militant.  It gets me no where fast.  I am pointing out, for the umpteenth time, we have made little or no progress with breast cancer in the only area that matters.  DEATH. 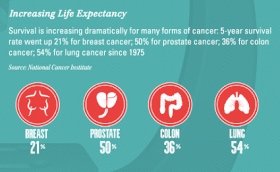 I have been saying that breast cancer is NOT the great success story it's so often hyped to be; it's just the one that's been best marketed.  This is a sobering reminder of how far we've come in 40 years.  Yes, 40 years.  I would hardly call a gain, that in simple math, equals one half of one percent per year.  I certainly do not see this as a dramatic increase in survival.  It's actually abysmal.

And now to the headline.  Joan Lunden is the latest celebrity to join this club.  I'm not going to steal any of the quips or lines I read anywhere else but let's just say that Good Morning America seems to be suffering from the Breast Cancer version of the SNL early death syndrome.

I've seen people criticize the use of the war metaphors.  Frankly, although not my cup of tea, I respect everyone's right to do cancer their way.  And there is no right way to do cancer.  There is only the way that works for each of us.  I have little patience for sitting in judgement over choice of words.  Ditto, cancer is a gift.  Not for me, but for someone else, maybe. Again, none of my business to criticize.

My rub?  And I've said this before.  Tell the whole story or don't say anything.  Get ahead of the tabloids and TMZ.  Yes. Announce there has been a diagnosis because yes, it will come out, likely sooner rather than later.  Control the information.

Also fine and something that is a source of (seeking the right word... thank you chemobrain) solidarity (it's not the word but it's the best I can find thanks the the word drop):

"In the beginning you almost feel like, 'What did I do wrong?' "

On an interview sofa, stick to the feelings, the emotions and leave the science behind the diagnosis out of the conversation. Realize, too, that many of those watching do not have anywhere near the ability to access the same level of care.  Understand that your message is being discussed openly by countless people thanks to the wonder of twitter, Facebook and many other social media channels.

The caveat?  If you are going to share the diagnosis, share it fully.  Please don't choose words like aggressive in the same conversation when explaining the mammography showed nothing but the sonogram found the tumor.  To me, I read lobular breast cancer which is hard to see on a mammography and the word aggressive means high grade, late stage.

I'm left with questions and when I understand the underpinnings of this disease to whatever small degree I've learned via my advocacy, I can't help but follow my human nature.  Speculation.  The science geek in me is speculating which makes me, too, a guilty gawker.  I would have loved to see this turned into a real teaching moment.  Talk about dense breast tissue.  Talk about the limitations, in some cases, of mammography.

The amount of misinformation being bantered about regarding breast cancer is staggering.  Early detection.  Better imaging. And yet, absolutely no progress in stopping death.  At least none to really speak of.....  The truth isn't tied in a neat pink bow. The truth is messy and underneath that pink ribbon, it's quite ugly, too.  We have to do something to stop our sisters (and our brothers) from dying of a disease that has had more money thrown at it from more sources than (speculation again) almost any, if not all, other diseases.

This is not a bash on Joan Lunden in any way shape or form.  It's more of a commentary on our society.  I feel that those in the public eye, those whose words and images come into our homes DO have a responsibility when sharing information about a disease diagnosis.  The information should be accurate and complete or it should not contain any medical details at all.

I do wish Joan Lunden the very best as she pursues whatever course of treatment she determines is best for her.  Every diagnosis saddens me.  And every death is like a dagger to the heart.