I had every intention of following up 3 Weeks A Fever with a post about my 12 Days of ICU.  I was bedside being dismissed by every doctor as a moron while the patient was on morphine every four hours, incapable of sharing in any sort of decision making.  It's a good story but it will wait for a day or two.

Why?  Melissa Etheridge.  And AARP.  I already blogged about this in June of 2013.  In other words, 18 months ago.  AARP Magazine decided it would be a good idea to get some advice from Melissa so we could follow her lead by sharing those "lessons for all of us."

Wow.  WOW.  I'm dumbfounded.  As I stated in my original post, there isn't a shred of evidence in anything.  I'm disgusted.  Here's a screen grab of the offensive photo along with a link to the article.  I'm not even going to get started on the Beat Cancer thing.  I think we've beaten that to death in October.  Put a third person in that picture and one of them will metastasize but that's a whole other issue. 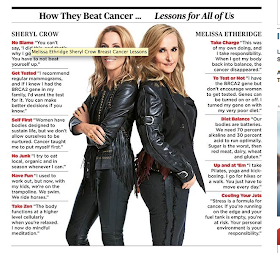 AARP Magazine is so thrilled with this article which may actually be a great article but seeing this, all credibility is lost and I am throwing out the baby with the bathwater.  I can't read a word of anything that was published by someone who would include this so prominently in the article.  They are so thrilled, their Facebook cover looks like this:

In case you don't feel like clicking back to my original blog post, this is what I had to say in June of 2013, words I still stand beside, with great pride:

Yes, that statement created a media uproar that I missed.  Apparently Brad Pitt made a comment and I have NO idea who else jumped in to the fray.  The follow up comment made by Melissa Etheridge says the following:

Note to ME:  Stick to the guitar and leave the science to those who know about science.

Note to AARP:  How could you?  Celebrities are entertainers.  To dispense of advice that flies in the face of anything resembling evidence based anything is extremely irresponsible journalism.  In my opinion.