COME AND GET ME

According to an interview with C. Michael White, Professor and Head, Department of Pharmacy Practice, at the University of Connecticut, once a drug comes off patent, one manufacturer's generic version is given exclusivity for approximately six months. Right off the bat, there is an opportunity for impropriety. I have no idea what procedure is used to determine which manufacturer is chosen by the FDA for that six month period nor, at this moment, will I attempt to figure that out.

Here's the skinny. The exact same amount of the active ingredient must be in the generic version. However, just because the same amount is used, the concentration of the drug in the blood may not be the same. It's chemistry. Like I said in a prior post. So, the next time someone tells you "they use the exact same amount," you can raise the ante and explain the real issue.

The same exact amount in a generic version with different fillers, is allowed to have a 10% margin of error. Technically, it's the concentration of the active ingredient in the blood. It can swing 10% higher or lower and as long as it's within that 20% range, the FDA deems the generic will produce the same results as the brand.

Since there are never head to head tests in people, this presumption takes nothing else into account. Is the medication effective with 10% less in the blood? Is it dangerous if it's 10% higher? What about those pesky side effects? Do they matter?? Well, the answer to all of those questions is along the lines of who cares, who cares, who cares and who cares. As long as the blood concentration passes muster, it's all good.

Bearing in mind that there are about a gazillion generics ingested daily and for the most part, they work, I'm being a bit hypersensitive but here's the thing. As I shared, I already had an issue with a generic. And here's the other thing, when I learned my aromatase inhibitor would no longer be dispensed as written by my doctor, yes, I got upset.

For eight and one half years of a scheduled ten year regimen, I have been on branded medication. Taking this little gold pill is more important than the chemotherapy. That some pharmacy benefit manager (PBM) pulled the medication off the formulary entirely and, to go a step further, dictates whose generic will be dispensed based upon where the PBM can get the best deal, pisses me off. So much for patient centricity. This is top down economics and let the ingester beware. Ingester isn't a word but it sounded better, so I decided I'd presume it's a word because, well, it's a form of the word ingest so it must be okay.

That's the background. I began taking the generic version of femara well over a month ago. I sent a few tweets out about my #GenericSwitch. I bitched a bit on Facebook. I was experiencing side effects that were more than annoyances. The biggest one, I suppose, was this issue with my balance. I've had balance issues but they got noticeably worse. I was bothered by the fact that the generic pills have a noticeable odor that did not dissipate.

On January 25th, I posted all of this on Facebook. Twenty four hours later, I found myself on the ground. I was climbing the stairs. They were immaculate despite the blizzard. Not even a trace of sand or salt anywhere that could have caused a bit of slide. Down I went, landing squarely on the outside of my right pinky. I went indoors to finish my errand, trying to shake the pain away, rubbing the scraped skin. Within two hours, I realized it was continuing to swell, the pain was getting really bad, the ice wasn't doing a damn thing, ditto the advil. I dragged my battered hand to the nearest urgent care center. 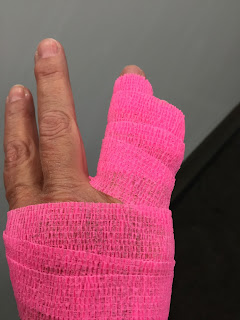 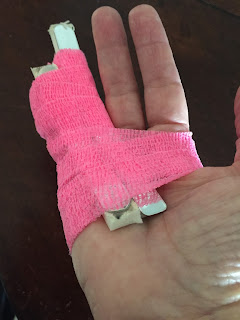 And yes, it was beyond twisted to have The Pinky in Pink-neon pink at that..... all sorts of dark (not haha) humor. It was a reminder of the g'damn loss of balance caused by a pill I take to help keep my pink ribbon cancer in check. It was all quite bizarre.

The following day, things got very interesting. The diagnosis from urgent care was a possibly pinky fracture and a very bad sprain on the ring finger. Or in medical speak, digits four and five were basically f*ked. Recommendation? Follow up with an orthopedic.

Now I am in full blown panic mode. I CAN'T get to an orthopedic without a referral from my primary care doctor. And, I haven't yet seen, or even met my new PCP. In other words, I needed to actually visit the PCP in order to get the referral. I called the nurse hotline hoping to be told I didn't need to waste the doctor's time and have them pay for an unnecessary visit. I slept like shit. The throbbing and an angst was a lousy combination.

The following day, the fun begins. I'm in pain, I'm frustrated and although I understand the concept of this gatekeeper nonsense for plenty of other ailments, a fractured bone? Not so much. A little common sense might have been good but Oxford wasn't having it. Too bad there is an x-ray from an in network urgent care facility from the prior evening at 7PM. Too bad, the urgent care doctor said, "Orthopedic, stat." Add the blizzard into the mix and the fact that many side roads were still not plowed, anxiety through the roof and the whole PCP thing was now pissing me off as much as the g'damn generic medication upon which I lay the blame for that hot (pink) mess.

By some stroke of luck, lots of phone calls and emails and a ton of help from my rockstar insurance broker, I was in the offices of both an accomplished hand surgeon and my PCP before the day was over. The surgeon confirmed the break. Upon seeing the broken bone on the screen, I started crying. For no apparent reason. I never broke a bone in my life. Never. Ever. As for the PCP, let's just say, I'm in love.

He asked what happened. Got very concerned when I said "balance." He had that, "You need a brain MRI" look on his face and he just met me. I explained the medication debacle and the forced #GenericSwitch and now he started to get all amp'd up. Suddenly, he was writing furiously. Listening, writing, asking for clarification and low and behold, my new PCP is well versed in medication issues. He began speaking to me, teaching me, telling me to understand pharmacodynamics and pharmacokinetics. "Look it up, learn and I am going to document everything. You fell. It's your pinky, but suppose you fell and hit your head." I told him I understood how anecdotal findings have no place in evidence based care and he cut me off. I think this is when I fell in love. "No, they don't. But if there are enough of the same anecdotal findings, we have the basis for a research study." Thus, I stand fully corrected on the issue of how I feel about being forced to see a PCP. Apparently, I lucked into a doctor who truly understands patient-centered care and is my partner in care.

The orthopedic rewrapped my fingers in splints where they will remain for six weeks. Digit four can be freed as soon as the swelling goes down. It's almost a week and it still hurts as much as it did when I fell. It's still swollen and my yoga instructor who happens to be a PT explained why I better not mess with that sprain. Something about the tendons. At least the wrap suits me. I prefer to be The Lady in Red in case you haven't figure that out from the appearance of this blog...... 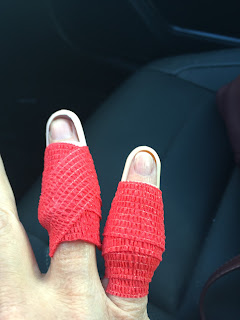 And finally, on Saturday, my branded pills arrived. I invite, no I dare, someone to come and arrest me for my act of civil disobedience. I asked my doctor for a written prescription. I had every intention of hunting down the authorized generic identical medication, the one that is being manufactured using the Novartis formula. I had every intention of calling every pharmacy I could until I realized, the generic identical is being manufactured by a company that is not on the list of FDA approved generics. Seriously??

Plan B engaged. I found the Campaign for Personal Prescription Importation, located a legitimate Canadian pharmacy where I had the option of branded medication that was manufactured in Canada or I could have them locate the Novartis facility where they could obtain the best possible price. I went for price. I'm trusting that Novartis does quality control at every manufacturing site they use. And thus, a site for sore eyes and yesterday morning, the letrozole bottle with its odor was tossed in the back of the drawer and I tore through a blister pack to fill my pill case. No smell, the color is right, the pill is identical. The language on the packaging and the insert? Couldn't even hazard a guess who speaks that language. I managed to locate where the box originated and I can tell you, I'd love to vacation there.

For now, happiness looks like this. A big mess. And my pills. Just slightly higher than my co-pay for the highest tier drug. I believe my tier three drugs are $80.00. This illegal import of meds cost $103.00 including the shipping. I have a 90 day supply. Of branded femara. I could have paid about $725.00 for a 30 day supply at my local pharmacy. Or, I could have paid the same amount, about $725.00, for a 90 day supply from a Canadian manufacturer.

They will refill it with plenty of time to get the meds from wherever in the world Canadian King can locate the best deal on a Novartis product. And there will be no more #GenericSwitch. 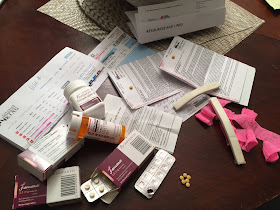 There's the proof for all to see. Laws were broken. Come and handcuff me. All I'd ask? The arresting officers kindly use care when slapping the cuffs on- there is, after all, a fractured finger, a severe sprain and a bruised wrist. 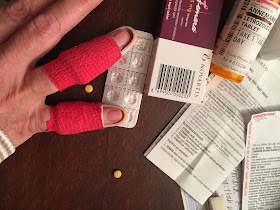 And if you happen to be my one phone call, please bail me out as quickly as possible so I can raise holy hell. I'm pretty sure I can get the folks at CPPI to help. 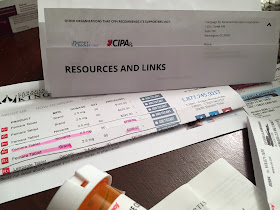