COME OUT, COME OUT: WHEREVER YOU ARE

I know it's not proper to start a blog post by saying, "sorry I haven't written" so I'm doing it with a twist. (Actually, I'd like to know who made this list of blog rules including the one to make sure to ask three questions at the end to engage an audience. I say, if I haven't engaged you long before the end, you ain't getting to those questions. I'm pretty sure I've never ended a blog by asking a question. Not my style and frankly, a bit too obvious? Not sure, rant over.)

I've challenged myself to come out from the shadows. Since the last post was a taunt to Come And Get Me for my act of civil disobedience, (really a nice way of admitting that I broke the law), no one showed up at my door touting handcuffs (which, perhaps I might have welcomed if..... never mind). Thus, I can't blame an incarceration on my absence.

I'm here, but with zero time to put together a coherent blog post that would actually matter to anyone except, perhaps me.

Lots of things are swirling around and I miss writing and sharing. I miss my blogging sisters and brothers. I miss the sense of community that is the blogosphere. My ability to write is definitely compromised. I'm rusty. Practice is essential to keep any skill sharp. I look back at some of the things I've written and I honestly think, "I didn't write that, those had to be someone else's words." So, I see the rust.

And despite seeing that rust, I don't know if there is anything I'll be doing about it any time soon. I want to say a hopeful yes.

And I want to share, for anyone who may be wondering, what I've been up to. I'm going to bullet point this because it's just going to be a jumble of things that pop into my head.

Time to hit the yoga mat and then go pick up more shells which I will happily share in the sandbox. And yes, that shell in the front is as big as it appears. 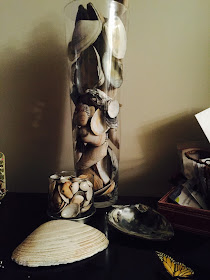