A New Year, A New Perspective

The next chapter begins. Or perhaps, it's the next book. Already, just 7 days into this year, I am surrounded by symbolism and I'm acutely aware of each of these things.

I spent New Year's Eve with a dear friend. We raised a glass at midnight, just the two of us, watching from the warmth of her home, as those in Times Square braved what I believe I heard was the second coldest ever. At 6:45AM, I was rushing into the car, the temperature a ridiculously frigid six degrees.

I arrived in Arizona mid-afternoon to begin my ESCAPE at Miraval. I highly recommend anyone in the advocacy space consider applying to this conference and I will write a proper post talking about what makes this conference so special when I can collect all of my thoughts.

Back in my Uber, as we approached Tucson from Phoenix, things began to look familiar. I realized we were on a road less traveled and it took us past a place where the entrance has a sign announcing "Miracles Happen Here" and I know, the other side of that sign says, "You Are a Miracle."

I know this because it was January 2, 2011 that I first walked through that facility. Here I was passing that sign on January 1, 2018. I grabbed my phone to double check the dates and then quickly used my fingers to count. If life indeed happens in cycles, that day was the end of a seven-year cycle. Symbolic.

Fittingly, my son's birthday was yesterday, and his age this year is a multiple of seven so he too is beginning the next seven-year cycle in his life. And he will be married later this year. An exciting time for him, for his beautiful bride to be who is one of the kindest and most considerate people I've ever met, and exciting for me.

Funny in a way, was realizing that the night of January 1, 2018 would be the night of a full, bright and beautiful supermoon. I saw it as I was walking back to my room after dinner and it was right in front of me the following morning, still high in the sky at 7AM. 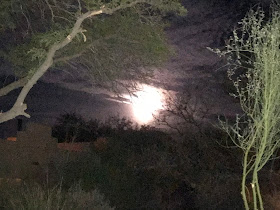 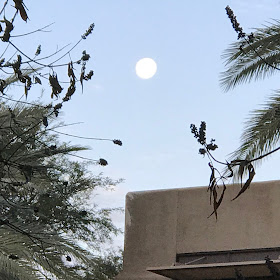 Later that morning, I scheduled a Quantum Leap. I did this in 2015 at the same conference. I shared my experience in a series of photos in a blogpost. It was in a group session. This time, I did a private "leap" because it felt like the right way to conclude the year of turning inward. I would boldly step outward. There are only a couple of photos because the same young man who was holding the rope to lower me safely to the ground, had to leave the rope to take some pictures. It took me quite a bit of time to steady my legs before I could put my arms at my side. 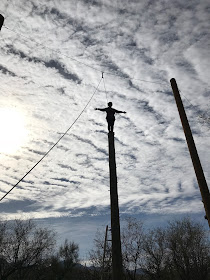 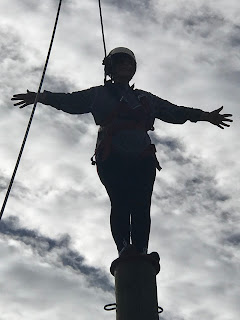 When I stepped off the pole, unlike last time, there was no fear. And as Caleb, my guide shared, it's not really a leap, I was just going to take one step forward. In 2015, I did leap, somewhat frenzied and definitely terrified. I know I closed my eyes. This time, I looked right at Caleb and calmly stated that I was ready to step forward. I took a deep breath and a simple step toward the ground 35 feet below. He lowered me slowly and I savored every gentle sway until my feet touched the ground. This time, it was controlled and without any feeling of chaos. Symbolic.

I proved that I AM ready to face what is in front of me this time, rather than simply move forward because going backward is not an option. My lessons in Quantum Leaps One and Two were incremental, and they unfolded in the time frame that I am able to handle. And that's the lesson. I was somewhat unsteady in getting to the top this time, and I recall pausing on those top pegs. I realized my legs may not be strong enough to make that last step to the top. I also recall thinking, "If this is as far as I can get, then that's all I have to give today, and that is okay. I will still be fine and I will get back down safely with Caleb's hands guiding the rope." It was in that moment of acceptance, that moment of this is all I have right now and understanding that whatever I have in any given moment is ENOUGH, that I surrendered completely. It was, for me, the ability to surrender without thinking or harsh self-judgment that I found myself stepping up boldly and fearlessly.

After we were together on the ground, we spoke about the activity and tears came to my eyes as he mentioned something about the Catskills. I met Keith in a bungalow colony in the Catskill Mountains and I felt his presence. Caleb was referring to Mike Tyson, and wanted to share a quote I'd never heard. "Everyone has a plan until they get punched in the face." I look back at 2017 as a year where I'd been the recipient of more than I'd like to count sucker punches. I suppose learning the roll with those punches, as that saying goes, is yet another moment. Symbolic.

I was reminded of the sharp contrast from my home with its sweeping views of the ocean and the moist air to the peaceful backdrop of the Catalina mountains and the dry desert air when my sinuses decided to let me know they needed some hydration. I ignored this until my nose decided to shout a wake-up call at me. I was not sick, I felt fine, but an annoying running nose? A reminder to pay attention to what my body needs in any given moment: Stay present and check in with myself. Symbolic.

Having dodged the blizzard in New York, barely paying attention to any of it until I contacted the person who always transports me to and from the airport told me to call him when I knew for sure I'd be on a flight. He wasn't too sure I'd be getting home. The airports in the northeast were all jammed up from the cancellations. Yet, I did get home on schedule, without a single delay and this was with an uncharacteristic itinerary requiring connecting flights and checked bags. Generally, I avoid both. Smooth sailing, or should I say flying. Hopefully, this will be symbolic of what lies ahead.

When I returned last night it was still as frigid as it was when I left on January 1. I picked up a total of one degree in temperature. It was seven when I exited the terminal at JFK. I don't recall when it's been this cold for this long. I despise the cold and I'm beginning to assess my desire to stay in NY but it is home.

I'm thinking that as I approach some upcoming unpleasantness, or downright ugliness which I expect to begin unfolding in just days, I will use this icy weather to remind me there are times I, too will have to replace my blood with ice. I will maintain steely iciness when dealing with those who wish to see me punched in the face. I will stand tall. No one will rattle my nerves and I will be on the sunny side of this.

I can't control the punches, but I can stop the bleeding.

I can't control the weather but I can turn toward the sun to feel its warmth and allow its light to guide me.

And, I can't think of a better place to have spent the first week of this new year. The group of people I was with at the conference, some close friends who so very dear to me, and now, new friends, too helped me open my eyes fully and helped me realize throwing in the towel isn't even an option I can entertain on any level.

And so I move, #AlwaysForward. With a reminder, a gift I purchased right before I left. A chain to wear around my neck. The message attached to the chain says everything I need to remember. 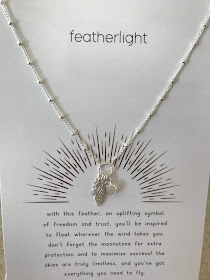