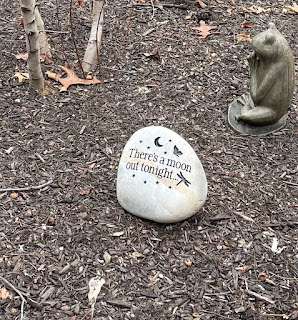 We emptied her home and it was recently sold. Impulsively, as I left the closing, again, with COVID restrictions still in place, I was the only family member present, I realized I was very near the cemetery. I drove to her gravesite. When I was leaving, I was stunned at the exit as I was flipping around the radio stations to hear this blaring from my car speakers ... 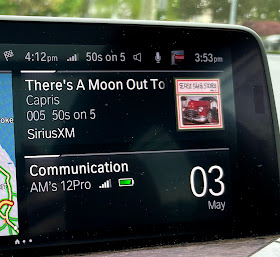 It's impossible for me to NOT think she was watching over me as I put all of her affairs in order. So, every night when I see the moon shining down, I will forever remember my mom.
Not a single day goes by when I'm not thinking about her, missing her, grabbing the phone to call her. I have had the support of many of you and for that, yes, grateful beyond words.
Yesterday was eight months that she left this earth. And today is Father's Day. It has taken me this long to share all of these details and to say for certain, this will be the last post I will make.
My chemobrain is resolved.
My marriage is dissolved. Finally, and I'm happy and free.
My reconstructive implants have been redone - twice (November of 2019 when mom took care of me and redone in February of 2020 when I had lots of people jump in to help with my recovery).
I took back the only name that matters, the name I was born with.
I bought a new home and moved in right before the world as we know it came to a screeching halt.
And throughout all of that, I said goodbye to my mom with gratitude for the life she gave me and with even more gratitude for the way hers ended. On her terms. Without pain.
My mom and dad will always be the wind beneath my wings. With this blog, my mom was always my biggest cheerleader. So, it is fitting to say ....
With this post, I bid farewell to this chapter of my life. I'm still around - I'm on twitter, I'm on Facebook although I haven't checked that platform at all since right after I had to login to my mom's account, and my email address is on this page, too. I'm entrenched in research advocacy and I'll continue doing that for as long as I am able to add value at the tables where I am seated.
This blog was the vessel that opened up so many doors but those of you who read my rants, cheered with me, cried with me, laughed with me, got outraged alongside me. Each of you has carried me to this place where I can now officially turn the page and begin writing the next chapter. The blog needed closure and this homage to my mom seemed the best way to do just that.
Thank you all for helping me in ways you might never fully appreciate.
With love to all who find their way here,
Anne Marie
xoxoxo
Like it?  Share it!
AnneMarie at 3:55 PM
Share